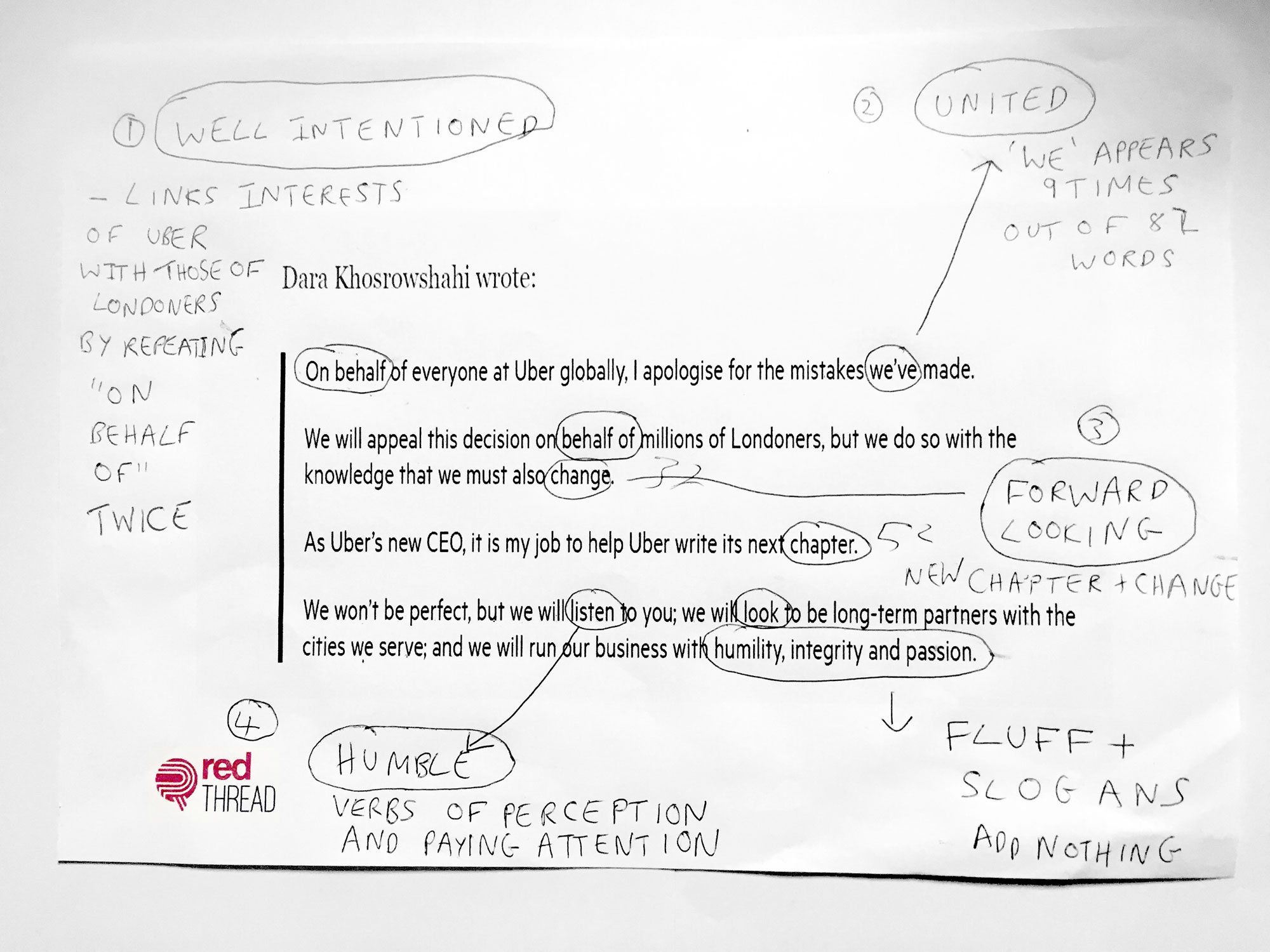 How important is emotional intelligence in a CEO? If you’re the new boss of Uber, then it’s an understatement to say it’s probably your most important asset and you need to show you’ve got plenty of it.

And judging from his nostra culpa open letter in Monday’s Evening Standard, Dara Khosrowshahi is keen to show us he’s one empathic dude.

The question for communicators is why and how is it so effective?

Granted, there’s the usual apology/we’ll do better messaging that gets wheeled out as part of the standard crisis communications kit for CEOs. But most of the letter’s empathetic tone comes down to the tone created by the language.

And here are four things his use of language tells us about the image Mr Khosrowshahi wants to project of himself and the company.

1. United
Out of a 214-word letter, the words ‘we’, ‘our’ or ‘us’ appear 20 times which means that every tenth word is some version of the third personal plural. This shows us that the new CEO wants to present himself in complete alignment with his staff and they with him. Everyone is responsible and no one is responsible. But what’s clear is that there is no scapegoating going on here.

2. Well-intentioned
By repeating ‘on behalf of’ twice (once in relation to Uber’s worldwide staff and once in relation to Londoners) the CEO seeks to link the interests of Uber with those of the city they’ve just been banned from. This sense of mutual identification is further enhanced by his repetition of ‘global’ or globally’. In the opening paragraph he apologises ‘on behalf of Uber globally’ before referring to keeping this ‘great global city moving’ at the end. Assuming this isn’t some thinly veiled Brexit reference, I can only imagine the idea is to create some kind of Hegelian frame of reference for the audience along the lines of ‘Uber is global, London is global, therefore the well being of Uber and London MUST BE THE SAME THING’.

3. Humble
No, not the vacuous slogans about behaving with ‘humility, integrity and passion’. That stuff is straight out of the corporate tosh handbook and adds nothing of value here.

What’s more interesting is the choice of verbs for what Uber plans to do next. They will ‘listen’ and ‘look’, both of which are verbs of perception and cooperation rather than bombardment (which Uber is typically associated with). I’ve written previously about communicators who absorb rather than emit and this is what Uber is promising to do here.

4. Transformational
Mr Khosrowshahi characterises his role as to ‘help Uber write’ its ‘next chapter’, which gives us some insight in how he wants to frame the company’s current predicament and his role in resolving it. By using the story metaphor Mr Khosrowshahi is setting up the typical protagonist struggle narrative which (assuming the plot follows a traditional route and not that of Breaking Bad) will eventually result in the company overcoming its demons to emerge into a triumphant, wiser and fairer future. This may sound like yet more corporate tosh but the key point here is that Mr Khosrowshahi is at least acknowledging that the company has driven itself into a ditch and that there is some way to go to pulling it out.

For what it’s worth I suspect that Uber’s new CEO has been brought in precisely because he does have the necessary emotional intelligence the company needs at this point in time. But a well-constructed, albeit genuine, letter can only go so far in framing public perceptions of a company’s behaviour. Mr Khosrowshahi has set a high bar for himself and his company’s behaviour going forward. They may well be granted another chance in the UK but if they don’t put their money where their mouth is then no amount of eloquence will help Uber reverse out of the ditch next time it drives into trouble.