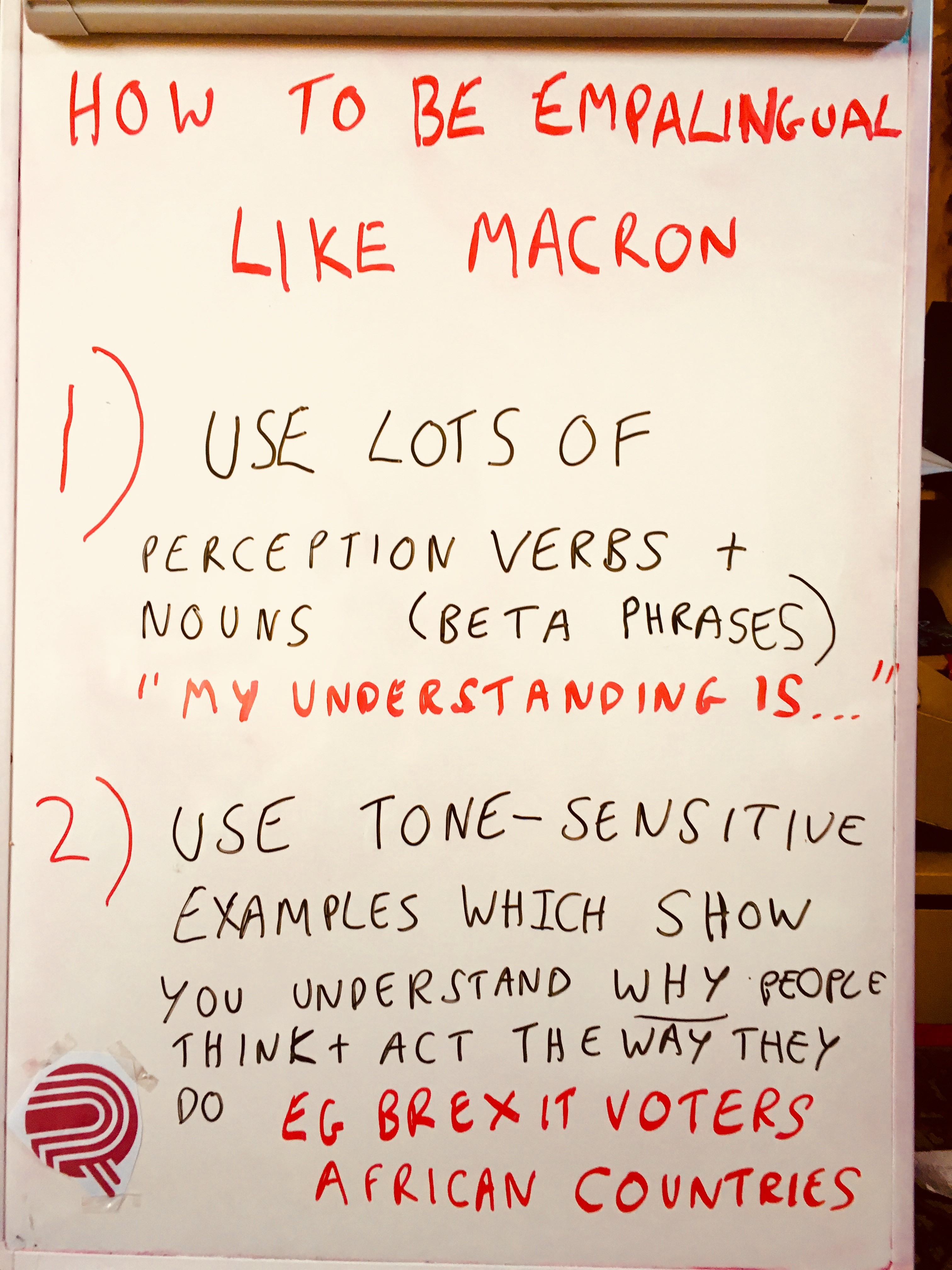 There’s a fair bit of Macron mania sweeping the UK at the moment after the French President did an extremely accomplished and engaging interview in near perfect English on the BBC’s main Sunday morning politics programme.

Commentators picked out his confidence, politeness, wit, grasp of subject and willingness to answer direct questions as some of his main assets.  These sound like the communication qualities we should expect from our very best political leaders but, faced with the current crop on offer in the UK and the rest of Europe, a lot of journalists (and ordinary viewers) were understandably charmed by Macron’s fresh, direct and (yes) visionary style.

From a conventional PR perspective Macron also delivered the goods. He used prepared messages and examples and was adroit at steering his way sensitively but skilfully over a range of topics including Brexit, China, France itself, and his relationship with Donald Trump.

In a lot of ways Macron reminds me of Tony Blair in the early days of his premiership and the comparison is all the more apt because it reinforces how being able to communicate comfortably as well as competently is so important for taking people with you.

But there’s something else about Macron’s style which isn’t out of the textbook communicator’s kit. He’s what I would call an ‘empalingual’, which means the way he speaks (even when not in his mother tongue) is highly empathetic and demonstrably tuned in to how other people are feeling.

Empathy is a widely discussed topic at the moment. Theresa May was criticised for exhibiting none during last year’s general election campaign, Angela Merkel appealed for Germans to show more of it during her New Year’s speech and Satya Nadella, the CEO of Microsoft has said the company he leads will not be able to innovate properly if his staff aren’t able to put themselves in the shoes of their customers to identify their needs.

Critics, such as the author and psychologist Paul Bloom, argue strongly against empathy in decision making on the basis that an ability to ‘feel’ another’s pain can cloud politicians’ judgement and lead them to make decisions that aren’t necessarily in the interests of the wider group.

But views such as these may be based on the idea that empathy is only something we experience through direct feeling and that it’s also about actively showing the emotion accompanying it. But there is also a second type, known as cognitive empathy which is more about understanding why people feel the way they do even if the empathiser in question doesn’t actively feel the emotions themselves.

And it’s this type that I think Macron has in bucketfuls.

But what does cognitive empathy look like in media interviews, particularly if the speaker isn’t talking in their mother tongue and some recent-ish, fascinating research suggests that people may well be less empathetic when thinking  in their second or third language?

In Macron’s case, two things stand out that show he’s empathetic. Firstly, he uses a lot of what I call ‘beta phrases’ i.e. verbs or nouns of reception and perception in order to show that he’s listening, processing but not giving the definitive position on an issue that matters to other people.  For example, on the reasons people voted for Brexit he says that it’s not his place to comment or judge but uses phrases such as ‘my understanding’ and later ‘my interpretation’ before introducing his opinion. Likewise, when asked how he felt about  Trump’s s’@*hole countries’ comment he said ‘we have to understand’ and ‘we have to respect’ the historical reasons why speaking like this about those countries is unacceptable.

Secondly, Macron used a lot of tone sensitive examples that suggests he has some insight into why people think and act the way they do (and ergo how best to deal with them). The first was about how best to raise the issue of human rights with Chinese President Xi Jinping (apparently not by trying to force him to do ‘in front of the camera diplomacy’ at press conferences which don’t go down well in China).   The second was his explanation that Trump’s comments may have been so offensive to African and Middle Eastern countries because so many of the problems they experience today are partially linked to their ‘frustrations’ about ‘past humiliations’ which is why it’s all the more important to treat them with sensitivity and respect.

You could say these are all the skills of a good diplomat. But the world seems to be in short supply of them these days and a politician who manages to strike the right chord while coming across as fresh, direct and on message – all while talking in a second language – makes for a formidable interviewee.