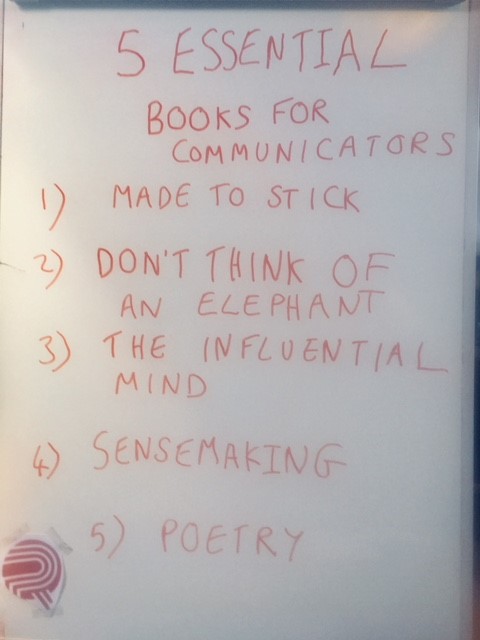 People often ask me what books they should read to improve their spoken communication and messaging skills. Below are the ones I find myself referring to a lot at the moment. Some of them (1 and 2) are old favourites that have been on my bookshelf for years.

Others are new additions which have given me new takes on, language, different kinds of evidence and insights into what human brains are and aren’t capable of dealing with.

They’ve all made me think and frankly, I feel that I should get a cut from the royalties given how many people I have raved about them to and persuaded to buy them.

So here they are in no order of preference:

1. Made to Stick by Chip and Dan Heath
Mercifully short and packed with colourful examples, this should be compulsory reading for anyone working in the business of persuasion. The Heath brothers took Malcolm Gladwell’s Tipping Point concept of ‘stickiness’ a step further and identified six qualities that make ideas ‘stick’ with an intended audience. Ergo, sticky communication is Simple, Unexpected, Concrete, Credible, Emotional and uses Story.

And, because this is an American business book, the first letter of all these qualities adds up to SUCCESS when taken together.

What more could you want?

2. Don’t Think of An Elephant by George Lakoff
Even more concise, Berkeley cognitive linguist George Lakoff’s 2004 exploration of why US conservatives are so much better than liberals at winning political arguments set the bar when it comes to talking about language and framing. Frames are basically words or phrases that are repeatedly used to describe an issue that at some level appeals to the framer’s core audience’s values. The frame is usually compelling in its own right but is often made even more powerful because opponents end up reinforcing it when trying to rebut it. So, conservative expressions such as ‘tax is theft’, ‘uncontrolled migration’ or ‘suffocating red tape’ are legitamised through the debating process itself.

This book should be compulsory reading for anyone working in EU politics.

3. The Influential Mind by Tali Sharot
It seems you can’t have a list these days without a book in it that refers to a part of the brain called the amygdala. In this one, Israeli neuroscientist Tali Sharot explores why certain attempts to influence people do and don’t work according to how our brains are structured to respond. In the aftermath of Brexit and Trump, a lot of the lessons on how to approach messaging based on facts, fear and control may not seem that novel but it helps to have an explanation for why we overstate human beings’ capacity to respond to certain kinds of information in a rational way.

4. Sensemaking by Christian Madsbjerg
This is another one about how humans make decisions. Madjsberg is a Danish management consultant whose central argument is that humanities – including the ‘thick data’ of culture, story and mood are more important than ever in the age of the algorithm. If this sounds like a no-brainer that’s because it is. But if you work in a profession where people are evangelical about Big Data and Artificial Intelligence then this is the antidote. Particularly riveting is the section on how George Soros used his philosophical training and personal experience of growing up in authoritarian Hungary to make investment decisions. Margrethe Vestager, the EU Competition Commissioner also makes an appearance, talking about how she consciously injects the human dimension into her competition policy brief.

5. Poetry
Read any: whether it’s in your mother tongue or in English (ideally I’d like non-natives of all nationalities to read it in a language they use for work but are less emotionally attached to). It does wonderful things for generating mental pictures and helps people who sometimes take a functional view of bilingualism to connect and communicate, not just speak,  more effectively in another language.  Some of my favourite poets (to name a few) are Louis MacNeice, Rainer Maria Rilke,  Kae Tempest, Kim Addonizio, Tennyson and T.S. Eliot.